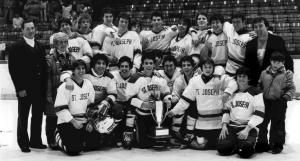 The Bergen County powerhouse put up some remarkable numbers during the winter of 1983-84 for coach Frank Horan. In the final year of the Bergen Scholastic League, St. Joseph had an amazing 26-0-1 record, scoring 279 goals and only allowing 39. St. Joseph beat Brick in the state final at South Mountain Arena, 7-6. Noted as a team full of outstanding players, which included Max Middendorf (HOF 2010) who went on to play in the NHL and Gene Katz, who later coached the team to a state championship.