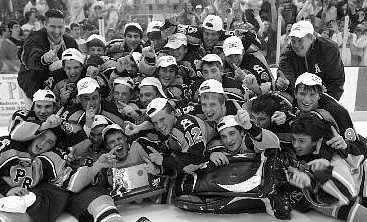 Kevin Healy was our goaltender who went 23-0 and was named player of the year. Our defense was lead by Chris Ferry and Anthony Casalle. Our forwards included Dominic Marone, Kevin Crowe, Ryan Mara, David Macalino, Zach Stern and Robert Baskow all were a big part of our offensive success.