What started as a way to make some money in between acting gigs, turned into a lifetime of “acting” like an official for well over ten thousand games and more directly, over 1,500 high school hockey games over a 30+ year endeavor.

Peter has served the referee community as an assignor, seminar instructor, referee-in-chief of the AYHL and the MJHL and President of the local chapter of NIHOA. He has worked the RHI and currently works for the NHL as an off-ice official. Some of the big games (they’re all big) Peter has officiated in a proud career include multiple TOC championships and Public school championships, along with several Mennen and Gordon Cups and other Cup finals and semi’s. The “Best” officiating experience might have been when he did both the Mennen Cup and the Gordon Cup on the same day, with a few minutes to spare.

As a player, Peter was team captain both his junior and senior years at Hanover Park (’79). He went on to play at Elmira and then Upsala
College, under, referee, Dave Sloan. After college, while pursuing acting, Peter was the hockey director at Totowa Ice World and then onto coaching stops at Hanover Park, Millburn, Hudson Catholic, Parsippany and currently, Pequannock.

He is happily married to his bride of 23 years, Barbara and has three young adult children, Brian, Catherine and Patrick. 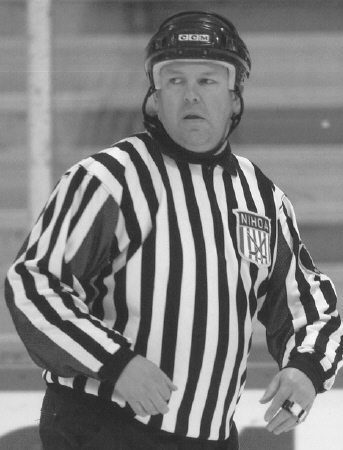