Donald L. Eccleston was born in Providence, Rhode Island in 1943 and died in 1993 in Pomfret, CT as the age of 50. He was a graduate of Deerfield Academy, Brown University and Suffold University. He was a staff sergeant in the United States Army during the Vietnam War. He was inducted into the Brown Athletic Hall of Fame in November 1993 posthumously.

Don, was a top defenseman during the early 1960’s and was selected to the 1964-65 second team All Ivy League team the same year that Brown won the Ivy League championship and went to the NCAA Championship Final Four. After his playing career, Don was a successful hockey coach at Montclair High School where he coached from 1978-83 leading the Mounties to a 1981 NJSIAA High School State Championship. He also coached at the Pomfret School in Connecticut. 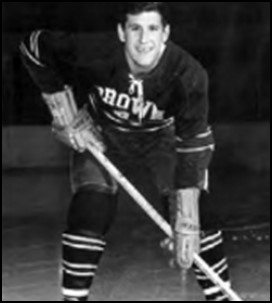