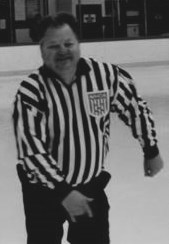 Bill Sidun has provided leadership, guidance, instruction and administration to the High School and Amateur officiating community in New Jersey over the past forty years. He first became an AHAUS (now USA Hockey) official in 1974 and then served as Second Vice President (1990-1998) and President (1999-2005) of the National Ice Hockey Officials Association, Metro NY-NJ Chapter, which provides all New Jersey High School Hockey Officials.