Born with a stick in his hands, Alex Rauter was the definition of a rink rat. From an early age, his mother Leslie and his father Tom shuffled him
around to dozens of rinks in the NJ area so he could play the game he loved. Most notably though was when Tom, a coach at Chatham, would bring him to Mennen Arena at 5 AM just so he could watch the cougars practice. From there, his passion and love for the sport followed him all the way to 2011 when he helped Harvey Cohen and Chatham capture the first State Championship in school history. From there he went on to become a Captain at Cornell University and received a nomination for the Hobey Baker Award. He currently plays professionally with the Chicago Blackhawks minor league affiliate, the Indy Fuel. 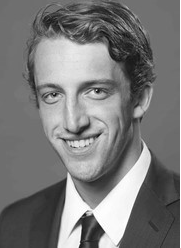