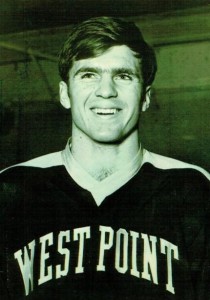 Pat was the last four sport athlete at Seton Hall; he played quarterback and safety for football, guard for basketball, center and defense for hockey and was the catcher for the baseball team. Pat was a member of the inaugural hockey squad at Seton Hall. Pat received individual all state honors for hockey and baseball his junior and senior years. Pat was leading scorer for the New Jersey Interscholastic League the first year the Prep entered the league and won the B championship. In baseball, Pat was the team’s batting leader in 1971 the first year Seton Hall won the Greater Newark Championship Crown (the State’s most prestigious tournament at the time) and the Parochial A State Championship. Pat captained three teams as a senior and received the Essex County Scholar Athlete Award in ’72. Pat was inducted into the Seton Hall – Hall of Fame in 1990.

He went on to the U.S. Military Academy playing varsity baseball for 3 years and varsity hockey for 4 years. Pat captained the Army hockey team in his senior year leading the squad to the NCAA Eastern Regional Semi-Finals. Pat served 20 years in the military as an U.S. Army Infantry Officer and continued to coach youth hockey through high school and college level winning several state and regional championships.