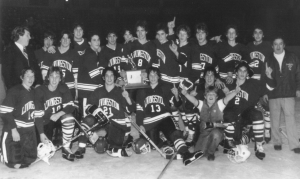 Livingston High School finished the 1980 hockey season 19-6-1 and won the NJSIAA State Ice Hockey Championship. Livingston won the championship game to a standing room only crowd at South Mountain Arena against a heavily favored Brick team, 1-0 in Overtime. Sophmore Joe Tracy scored the shorthanded goal for the Lancer’s win. Jim Mair played the game of his life in the goal for Livingston. That season Livingston scored 190 goals while only allowing 67.